The newest condo tower in Vancouver is going to have some excellent views. I was one of several agents that toured the nearly complete project donning a sporty hard hat. Among many exciting features Kirkland Tower will have a community rooftop garden on the 12th floor overlooking Downtown Vancouver. Imagine watering your tomatoes and soaking in the fabulous urban landscape.

I did a complete write up on Urban Living in the 'Couv' you can read that here.
These views will come at a premium, the Tower is the only one of its kind in the Portland - Vancouver metro area. A so called 'Lifestyle Living' arrangement whereby the condos are attached to a hotel and the services of the hotel are part of the HOA. Homeowners can use most if not all of the hotel services such room service, concierge, etc. Units will start in the low $900's and top out in the low to mid $4 million range, monthly fees likely in the $1000 a month range as well. It's all good right ;)

Another look at Houseboats

With property values skyrocketing, houseboats are gaining an edge. Moorage fees are not seemingly as bad when contrasted with high land costs. 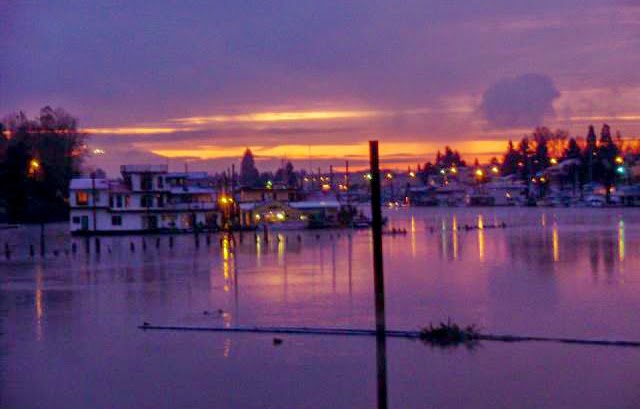 Floating views? You may be thinking I am taking advantage of Washington State's legal marijuana with a headline like that. No, I assure you I am quite sober. The Portland metro area however does have a pretty large collection of floating homes. I would say the lion's share is in the inside channel of the Columbia River between Hayden Island and North Portland. This channel is protected from the main Columbia River traffic and flow through clever engineering. There are a variety of yacht harbors and marinas in and around Hayden and Tomahawk Islands in North Portland. Of course there are hundreds of permanent floating homes in the area as well. These vary from cozy little ensembles well under $100,000 to elaborate floating mansions approaching a million dollars.

Over here on the Washington side of the Columbia we have floating homes as well. Although our collection is much smaller since the Columbia River's main channel is not suitable for such housing. Our shore of the Columbia features more traditional and very expensive river front property. There is Caterpillar Island however, that creates a narrow inside channel. It has a marina and house boats. These floating homes look over the water into a recreation area on the island. 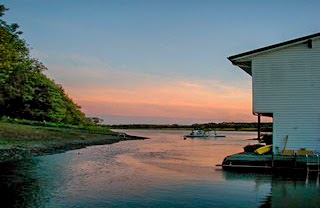 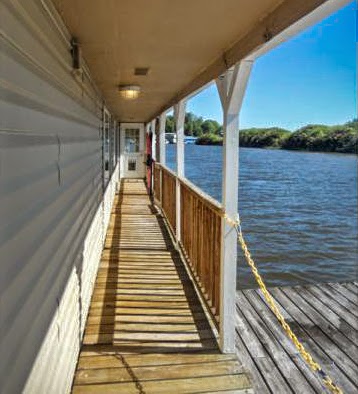 Here is an opportunity to own waterfront view property starting at entry level prices. I have seen listings as low as $20,000. There are of course some issues to be considered. First and foremost is the very name of these properties; floating homes. Yes they are floating and there is some mild swaying that happens in this type of home. It is not as bad as you might imagine however. There is also the marina fees. Just like a manufactured home in a park, these homes occupy a rented space. In this case a marina slip and those will having monthly fees ranging from $200-$500. These marinas sometimes offer a variety of services included with the slip fee.

There is some special maintenance requirements with this type of home and they are less forgiving than a traditional home when it comes to neglect. All of this aside many people enjoy the dockside living afforded to floating home owners. Although the views are sometimes limited due to the close proximity of the homes, they can be quite enjoyable.

The Columbian newspaper ran an article on houseboats here. Due to Washington State's more strict laws governing navigable waterways it is more difficult to build houseboat communities than it is in neighboring Oregon. This could be a factor in why we have fewer such facilities on the Washington side. Houseboat living is yet another way to enjoy the view.

Best View Values in the Couv

There are a handful of spots that offer up views on the skinny dime in Vancouver. Well not that skinny, have you seen real estate prices lately? But reasonably priced view property is not unheard of if you know where to look. So full disclosure most of these are condos, but there are some single family neighborhoods with views on the cheap as well. With no further adieu here is the Top 10 Best Value View neighborhoods in Vancouver in no particular order:

So there you have it, some value views in Vancouver.

Viewpoint Still a Player in the High-rise View Condo Market

I have a client eyeing urban condos in Vancouver right now and I toured this Viewpoint unit recently. Viewpoint is still the highest condo tower in Vancouver by floor count. By actual "height" it is probably the two 7 story Shorewood towers which sit atop a bluff in the Heights. But Viewpoint is a 4 story condo complex perched atop a 7 story office building. So floor 8-11 are condo and this unit was on the 8th floor. I have been inside several homes in Viewpoint but each and every one was facing east rather than west. The east view offers up the Cascade Range as a distant vista, but the west view looks over the park and the waterfront. 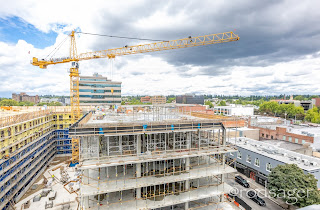 The 8th floor does suffer from some low angle obstructions as the 7 story Parkview tower is in front of you and so is the 6 story Columbia at Vancouver Center. But the west hills of Portland and the Oregon Coast range lies in the distance and that does make for some dramatic sunsets. This particular unit was a Northwest corner unit so it has two patios both covered and the main patio is huge. Due to the proximity of Esther Short Park the view here is protected and that is a nice thing. To the north the view had a close call with death when Holland originally proposed an 11 Story office tower. They scaled that back to six and this view is unobstructed to both the west and north for the most part.

I tend to like these urban views but it isn't for everyone. One of the nice bits is that nighttime tends to light up nicely. Also these Downtown locations are walking distance to scores of restaurants and breweries. So that's a plus, right?

Of course Memorial Day is in fact a memorial to the men and women of the armed forces that died in service, defending America. It also has become the defect start of summer in many parts of the country. Rarely in the SW Washington does it actually 'start' summer. Generally we receive some cloudy, cool, and wet weather for at least half of June. But this past weekend was nothing short of summertastic! Warm weather filled with bright sunshine was the theme for most of SW Washington including the coast for the most part.

This summer should see a near return to normal as the Governor is planning on having the entire state open by June 30 or earlier. The coast relies heavily on summer fun at the beach and this summer should be much better than the lockdown infected summer of 2020.

Get out to the coast this summer and if you can take some time to check out the local real estate scene. There are still relative values on the Long Beach Peninsula and retiring to the beach might just be for you. My sister and brother-in-law love it!

I went through the MLS this morning and grabbed five listings with nice views from across the broad spectrum of price from sub-median to the billionaires club. Take a look! These are ordered by price from lowest to highest. All listings were active the local MLS this morning.

I love showing my clients view properties because I do so enjoy the view! Feel free to contact me for additional information on these or any other listings you fancy or should you wish to list your home. 360-737-4600. views@rodsager.com.
Posted by Rod Sager at 10:37 AM No comments: 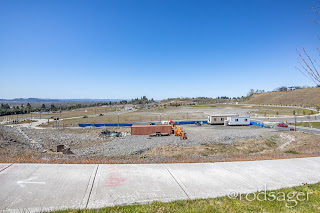 Borrowing from Apple iPhone there, but this isn't about the iPhone 12 and its 5G. Columbia Palisades went from dream to reality fairly quickly. This new neighborhood is being carved out of the old Fisher's Quarry rock and gravel mine on 192nd Avenue and Brady Road. Last year lots were sold up along the rim of the quarry for single family homes. Many of those homes are already built and most of the others are underway. This homes have rather spectacular views of the river and the city lights at night.

But now Kirkland Development, the company behind the 12 story Kirkland Tower condos at the waterfront, the Indigo Hotel at the waterfront, and the ambitious redevelopment proposal of the Restaurant properties just east of the Interstate Bridge; yes that Kirkland, is about to begin the Ledges at Columbia Palisades.

This was originally a pair of seven story buildings one with apartments the other with condos. That is still the arrangement but the structures will only rise five floors in the final product. This should allow for a more affordable Palisades experience than the gazillion dollar homes perched up on the rim.

Contrary to what you mapping software might think, this entire project is in Vancouver, not Camas. The homes perched up on the cliff however will be part of the Camas School District despite their location inside the incorporated City of Vancouver. Confusing, but whatever, it works. The apartments and condos will likely be part of the Evergreen School District.

The views here are pretty solid despite a base elevation between 200 and 400 feet. This development also has amazing access to the 192nd Avenue shopping corridor and immediate access to the SR-14 freeway. This should be a roaring success for those looking for a slightly less urban experience but not quite the three dogs in the yard suburbia routine. Bravo Vancouver, looking good at the east end.

What ever your do, enjoy the view!

The views expressed on this blog are those of the author and may not reflect the views of Weichert Realtors - Equity Northwest.